A healthy chocolate frosting that is lower in sugar and still perfect for piping, and a deep chocolate flavor. All because of a healthy mystery ingredient. Also gluten-free and dairy-free of course! Say hello to a decadent healthy chocolate frosting beyond your wildest dreams AND with less the sugar of any traditional frosting recipe. Naturally. No sugar substitutions here my friends. Just less sugar.

AND the addition of a wholesome ingredient that helps you sleep better, and maintain healthy blood pressure. It also is said to improve kidney health, support your heart and is strong in B-vitamins often missing in a traditional diet.

We all love frosting right? But who hasn't cringed when they pour the traditional 3-plus cups of powdered sugar into the bowl. Even vegan powdered sugar is missing bone char, yes, but it is still terrible nutritionally for us to eat.

Still, balance is key. We can't give up all our frosting dream, right?

How To Make Healthy Chocolate Frosting

But we can reduce that sugar and still make a dreamy fudgy frosting.

One that honestly is so delicious I would think I'd find it on gourmet dessert cake in a fine restaurant. I think that might be because it is not overly sweet and has such a deep chocolate flavor. In fact, I often call this frosting a chocolate ganache because it leans toward the flavor of a bittersweet ganache found on fine pasteries.

So how do I reduce the sugar and still keep the pipable texture? How to Reduce Sugar in Frosting

So what is the best way to replace sugar in chocolate frosting? Arrowroot!

What is arrowroot powder?

Arrowroot powder is an alternative flour derived from a tropical tuber called the arrowroot plant. It is used, as is corn starch, as a thickening agent. But unlike most thickening agents which are merely fillers, arrowroot contributes several B vitamins, minerals and useful zinc, a nutrient often found short in western diets.

Arrowroot powder is used often these days in gluten-free and paleo diet, and here it is a useful replacement for some of the powdered sugar in this recipe.

An added plus to reducing the sugar in this recipe is the texture adds a shine to frosting so your piping results have more pizzazz!

Tips On How to Frost Cupcakes

And for the cupcake with sprinkles, I used my chocolate hazelnut cake recipe, and 2M tip. 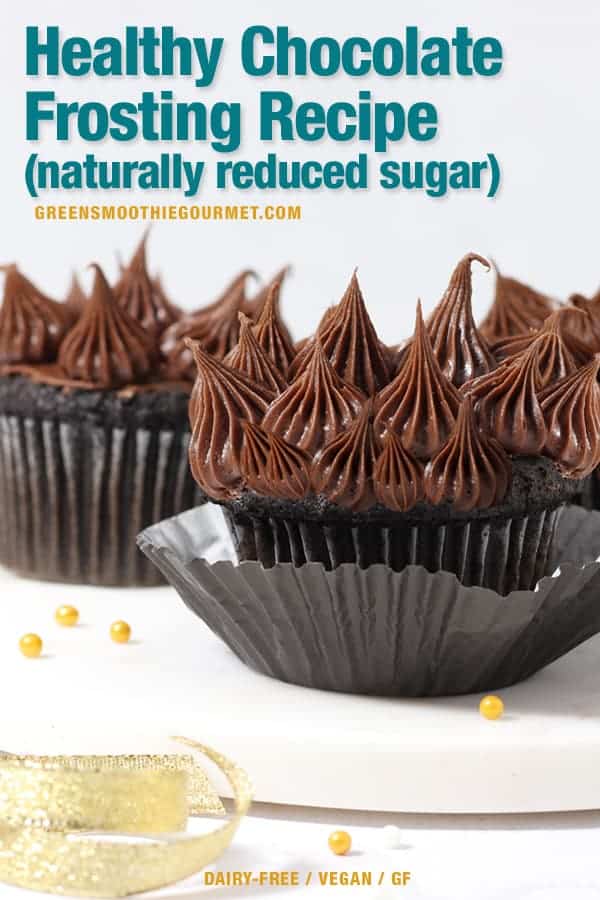 Healthy Smoothies to Feel Great for 2021