This fudge ripple cashew cream recipe is whipped light and fluffy, full of good fats, and the perfect compliment to a ripple of healthy melted fudge. 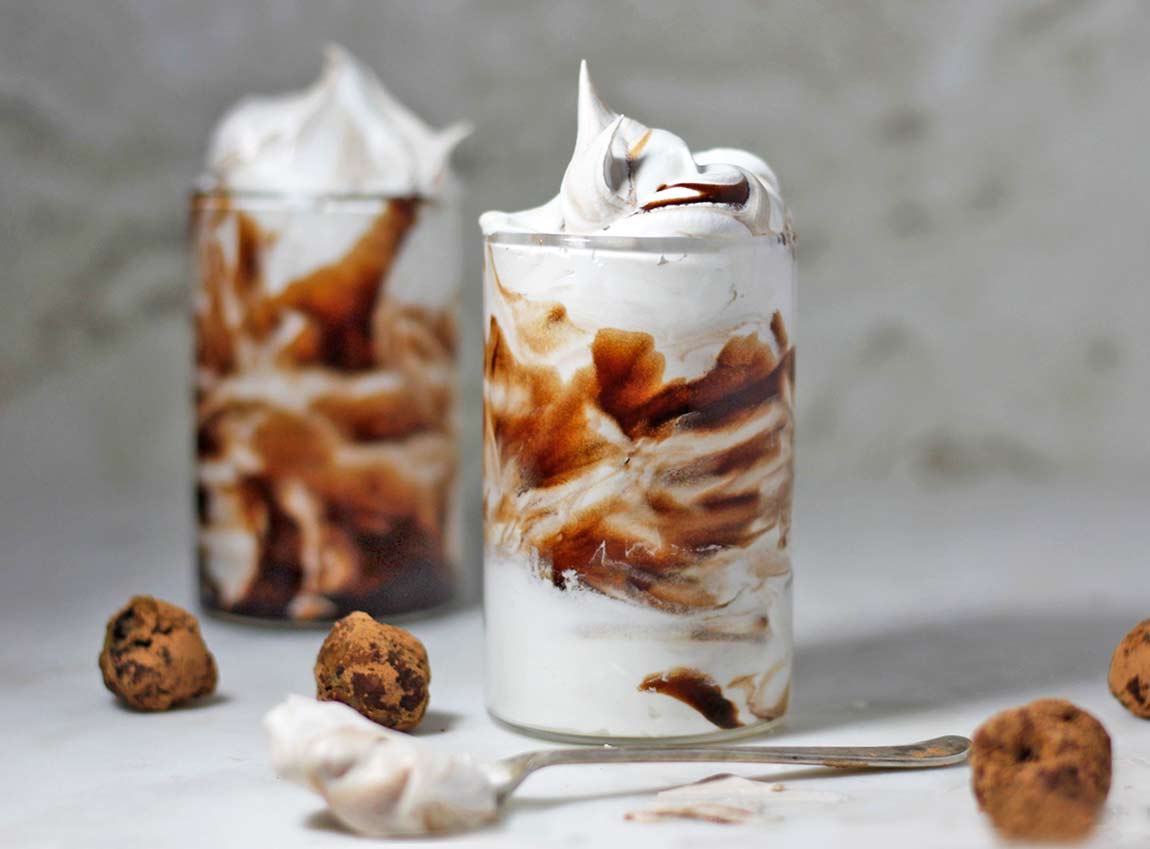 Cashew cream is a wonderful discovery. At it's simplest, it is a blend of soaked raw cashews, water, lemon juice and salt. The result is a light cream that makes the perfect healthier dessert for breakfast, especially swirled with melted healthy dark chocolate.

What is Cashew Cream A Substitute For?

I use it often in my desserts instead of whipped cream. Who needs a refined-sugar-filled, processed whipped cream when you can have whipped cashews? Cashew cream is also popular in savory recipe too though, a healthier replacement for dips, sour cream, ricotta, alfredo sauce, pesto and more.

Cashew cream is perfect in savory and sweet dishes. It can replace cream cheese, whipped cream, and all that is in between. And cashews are healthy, rich in many essential nutrients your body can't produce on it's own.

How Healthy is Cashew Cream

The foundation of this cashew cream recipe is to soak the cashews, blend them, and ripple in a healthy homemade chocolate sauce made of raw cacao powder. Together these two ingredients provide a huge antioxidant-boost.

Cacao powder, unprocessed raw chocolate from grinding beans from a cacao tree, is said to have more than four times the antioxidant power of blueberries. (Antioxidants zap harmful free radicals in your body that can cause disease.) Cacao also boosts moods, contributes protein and many important nutrients including magnesium, often hard to find.

Cashews are also high in vitamins E, K, and B6, and essentials minerals, and protein - 40 grams per cup. And the added coconut cream adds more healthy fats and stiffening to the mixture.

And will you be hungry after scooping this marbled cashew cream recipe? Nope. Creamy cashew cream is very filling.

Filled with healthy fats yet low carbs, cashew cream for breakfast can energize throughout the morning.

How Do You Make Cashew Cream?

Blend those with fresh water, salt and lemon water. I use a high speed blender, but I know a food processor can be used, although the cream won't be as creamy.

Refrigerate for an hour or so before attempting to stiffen if you want to pipe the mixture.

Here Is A Nut-free Alternative For This Cashew Cream Recipe

Want to make a cashew cream recipe that is nut-free?

Well, it won't be cashew cream. So change the name and try making hemp cream.

Hemp seeds have a nice balance of protein and quality fat and are also low in carbs. Here is one hemp seed cream parfait recipe of mine that uses sweet cream made from hemp seeds!

Cashew cream is great to just dollop on things, like fruit and cookies, use as a dip or pudding.

But if you want to make it pipable for cupcakes or parfaits, you have to stabilize it. Here are some choices.

One way is to fold in some organic powdered sugar with a touch of cornstarch. It can make the cream quite sweet however, so you should add a little bit at a time and taste-test. Plus, of course, adding powdered sugar, even organic, reduces the health factor.

Another is to add just 1 tsp of cornstarch per cup of cream. Cornstarch is very effective in stiffening the cream, but it can leave a gritty taste. The next best performer is  cream of tartar. Or you can add my favorite choice of late which is arrowroot. It not only helps stiffen but adds nutritional value.

Arrowroot powder, an alternative flour derived from a tropical tuber, is often used as a thickening agent. But unlike most thickening agents which are merely fillers, arrowroot contributes several B vitamins, minerals and useful zinc, a nutrient often found short in western diets.

It's a lot more work, but my favorite way to make cashew cream stiffer is to add whipped aquafaba.

To make whipped aquafaba, simply pour the liquid contents of a can of garbanzo beans into a bowl, add in ½ teaspoon of cream of tartar and whip for 7 to 9 minutes or until the mixture stiffens. (save the beans for another recipe). Fold this whipped aquafaba into the cashew cream.

Sometimes certain brands of garbanzo beans however add ingredients that stop that stiffening action, so this process can be a bit of a gamble. Once you have a stiff aquafaba whip, you'd want to fold a certain portion into the cashew cream to create a stiff texture. I'll try this at some point and share the results.

How Long Does Cashew Cream Last?

I refrigerate my plain cashew cream in a sealed jar in the refrigerator for 2 days. After that, I think it begins to taste a bit sour. I have had great success freezing it and recommend up to 6 months.

Want another cashew cream drink recipe? You might like my Neopolitan Sweet Cream Smoothie. I also go into more depth here regarding the nutrition of the cashew. Created by Dee Dine
This whipped cashew cream recipe is so light and fluffy, is both full of good fats, and the perfect compliment to a ripple of healthy melted fudge. Make it soft like pudding or stiff with the help of Aquafaba!
4.74 from 15 votes
Print Recipe Pin Recipe
Prep Time 4 hrs
Cook Time 20 mins
Total Time 4 hrs 20 mins
Cuisine vegan, dairy-free, gluten-free
Servings 4

For the cashew cream

For the fudge ripple