A Jicama recipe for a smoothie, an unusual veggie smoothie, high in protein and fiber, rich in chocolate and cashews, the perfect filling smoothie to power you through the day, and as creamy as a decadent milkshake. 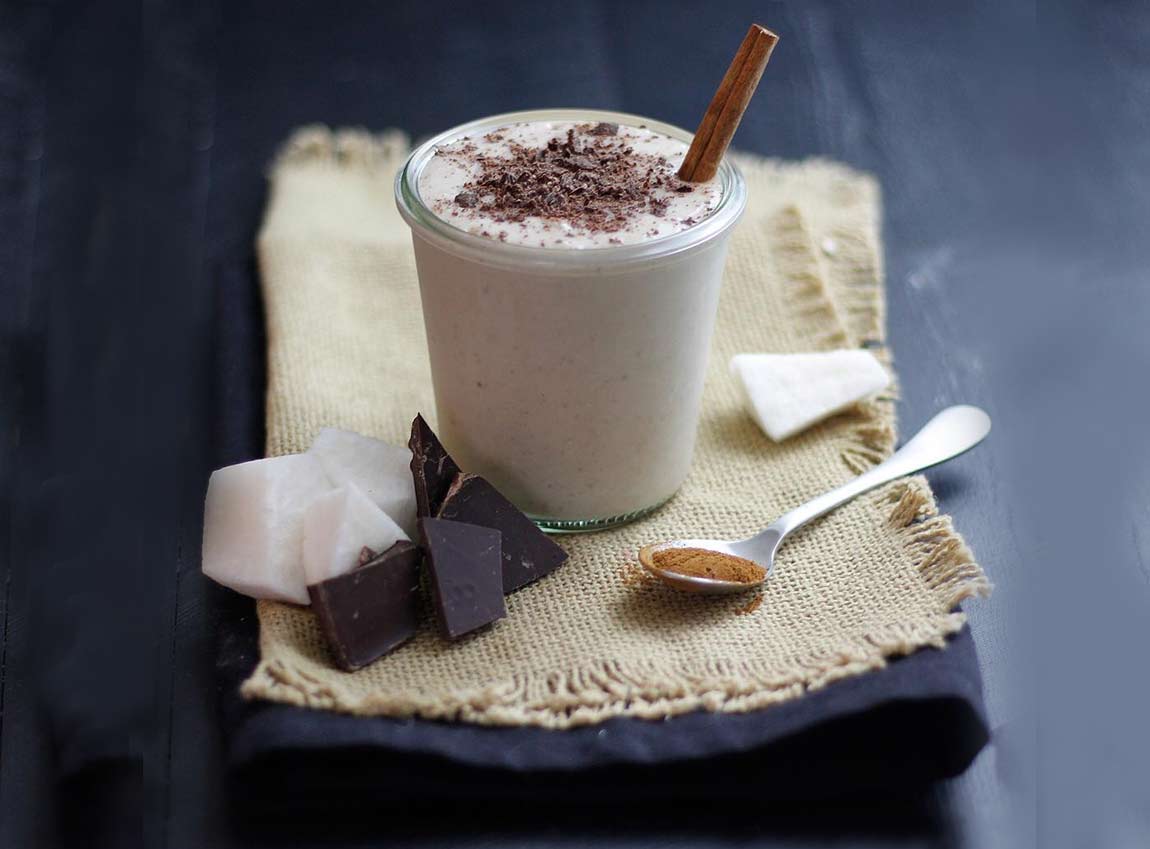 Chocolate Jicama Recipe for a Smoothie

A delicious jicama recipe for a smoothie that boosts protein and fiber, and is built around an unusual vegetable that adds a creamy texture and a fresh sweet flavor.

Smoothies are built with many veggies, including zucchini, cauliflower, sweet potatoes and more. Sometimes, though, it's interesting and nutritionally beneficial to experiment with different kinds of veggies. Jicama fits that description.

And actually, Jicama is interesting even beyond it's use in a smoothie because it is very low in sugar and fat, and some experts say it may be a great replacement for starchy, higher carbohydrate vegetables such as potatoes.

Jicama, pronounced "hee-kay-ma", is a native root veggie native to Mexico. The taste of this potato-like veggie is crunchy and clean, kind of like a dry-ish apple.

I am always looking for veggies to add to a smoothie, and this is a perfect candidate. Why? Because Jicama is high in fiber, vitamin C, magnesium and manganese and good to your gut bacteria and supports bone health. And it is low carb and low in GI index. And even a prebiotic. Read more about the nutrition of Jicama here.

The taste is also great for smoothies because it  is neutral. So you can use it in a fruity smoothie with pear and lemon, or chocolate it up as I have done here.

How to Prepare Jicama

This root veggie needs to be scrubbed and peeled, just like a potato. The skin is tough however, so I normally don't use a potato peeler, but instead use a paring knife to cut away the skin.

How to Make a Jicama Recipe

Jicama is far from a common veggie, but here are a few ways to eat Jicama:
1. Peel, cut it into sticks and serve raw with a dip.
2. Peel it and slice it into match sticks and make a slaw or add to summer rolls. 3. Peel, cut into match sticks and add to a stir fry. Jicama stays fairly crispy like a water chestnut.
4. Or slice it in thin chips, dehydrate into healthy chips.
To use it in a smoothie, it is best to boil it soft, just as you would to make mashed potatoes. Or, of course, boil and season as you would mashed potatoes and serve as a side dish.

Store in a cool dark place; once cut open, refrigerate and use within a few days.

How to Buy Jicama

It is often found in the root veggie area of many supermarkets, and generally doesn't seem to be seasonal, but is not always available depending on your geographic area. I have also found it in latin grocery stores.

Be sure to buy smaller sized jicama, as they are younger and sweeter, especially more important for a smoothie.

How to Make This Jicama Recipe Smoothie

This smoothie is made even more delicious and creamy using cashews soaked overnight. But if you don't have overnight time, replace with your favorite plant milk and increase the sweetener to taste.

Peel, chop and boil the jicama for about 20 minutes. Add all ingredients to a blender and make creamy! Chill before drinking.

Easy peasy way to have veggies for breakfast! I hope you enjoy traveling this interesting veggie smoothie today!

Other Veggie Smoothie Recipes to Try Chocolate Jicama Recipe for a Smoothie

Created by Dee Dine
A Jicama recipe for a smoothie, an unusual veggie smoothie, high in protein and fiber, rich in chocolate and cashews, the perfect filling smoothie to power you through the day, and as creamy as a decadent milkshake.
5 from 1 vote
Print Recipe Pin Recipe
Prep Time 1 d 20 mins
Cook Time 5 mins
Total Time 1 d 25 mins
Cuisine vegan, dairy-free, gluten-free
Servings 2