These healthy vegan brownies are fudgy, baked, dairy-free, and use organic ingredients that are nutrient-rich. 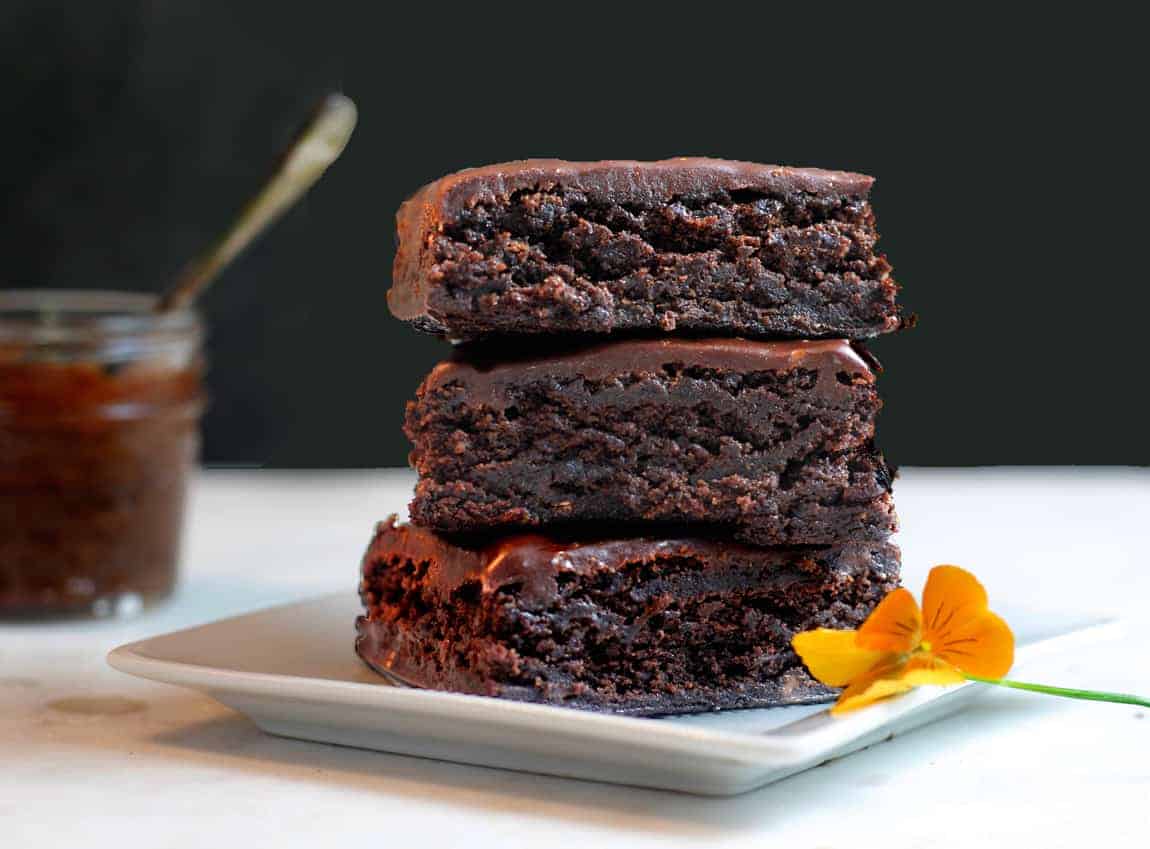 These vegan brownies are a dream come true. My sister and I used to make brownies from a box but they were not healthy. Haha. The joys of a boxed mix. Not sure what was in that mix.

Now, of course, the trend is to make them from scratch and make them healthier. And making them without dairy so they are vegan is easy!

Vegan Brownies Are Delicious For Non-Vegans Too!

These vegan brownies have nutritious ingredients that support healthy nutritious diet for everyone. Eating a dessert does not mean you have to ingest unhealthy ingredients. That's why this vegan brownie is welcomed by non-vegans as well.

Obviously, though, these brownies still have sugar, so they need to be eaten in moderation. No brownies for dinner people!

BUT these brownies do have the nutritive redeeming qualities that come from some very nutritious ingredients, including chocolate, flaxseed and more.

Let's have a closer look at the nutrition these fudgy bites offer.

How Healthy Is Chocolate?

The star ingredient is chocolate. In this recipe, I used dark cocoa powder but raw cacao powder is even healthier.

Chocolate is loaded with nutrition such as fiber, iron, magnesium, copper and manganese. But its biggest benefit is its amazing range of antioxidants, those little soldiers that zip around your body zapping free-radicals, little entities that cause disease and come from foods, pollution and more.

To get a more potent health benefit, choose cacao powder, you can find it in the baking aisle of most better grocery stores such as Whole Foods markets, and of course on Amazon, such as by this brand, Navitas Naturals.

However, if it’s more convenient, use cocoa powder, the unsweetened variety you normally see on baking section grocery store shelves. Read about the difference below.

The Difference Between Cacao Powder and More Commonly-Known Cocoa Powder

Cacao powder and cocoa powder are both unsweetened chocolate powders.

Raw cacao powder is healthier, made from unroasted cacao beans, a process that keeps nutritional values intact. Whereas cocoa powder is roasted at high temperatures, killing off nutritional value. Read more about the differences here.

But there is another kid to consider - dutch processed cocoa. It is less nutritious because it undergoes a process to reduce acidity, but it tastes even better than cacao or regular cocoa. I use Valhrona brand.

Flaxeeds are high in fiber and omega-3 fatty acids with improve digestion, and can lower cholesterol among other benefits.

Nutrition experts recommend using ground flaxseed so your body can aborb the nutrition. Whole flaxseeds can pass right through intact and you miss all the fun, haha.

In this recipe, they are not only ground but soak in water to create a "flaxseed egg". So the nutritional value is easily bio-available.

How to Make These Vegan Brownies

Making this recipe is fairly straight-forward.

Make the flaxseed egg, and melt the butter. Then, mix up dry ingredients, mix up wet ingredients, and mix them together.

And taste-test the batter! This is the beauty of a vegan brownie! No danger of salmonella from raw eggs. With this taste-test, I assess if it is chocolate-y enough. If you like, add another teaspoon of coffee. The coffee really deepens the chocolate flavor.

Once you are satisfied, pour the batter in a parchment-lined pan.

Finding the cooking time is the most challenging aspect of this fudgy brownie.

The first test is to use the typical testing toothpick. But beware that a done fudgy brownie will still leave a fudgy smear.

Another test is to shake the pan. If the center wiggles, it is certainly not cooked. So return it to the oven and check again in ten minutes.

You might want to note that this  is a small batch recipe. The recipe a loaf pan easily.