These gluten free brownies are moist, easy to make, and have an intense chocolate flavor. Not only gluten-free, these brownies are also vegan and dairy free. Easy to customize - top with frosting for a fun twist! 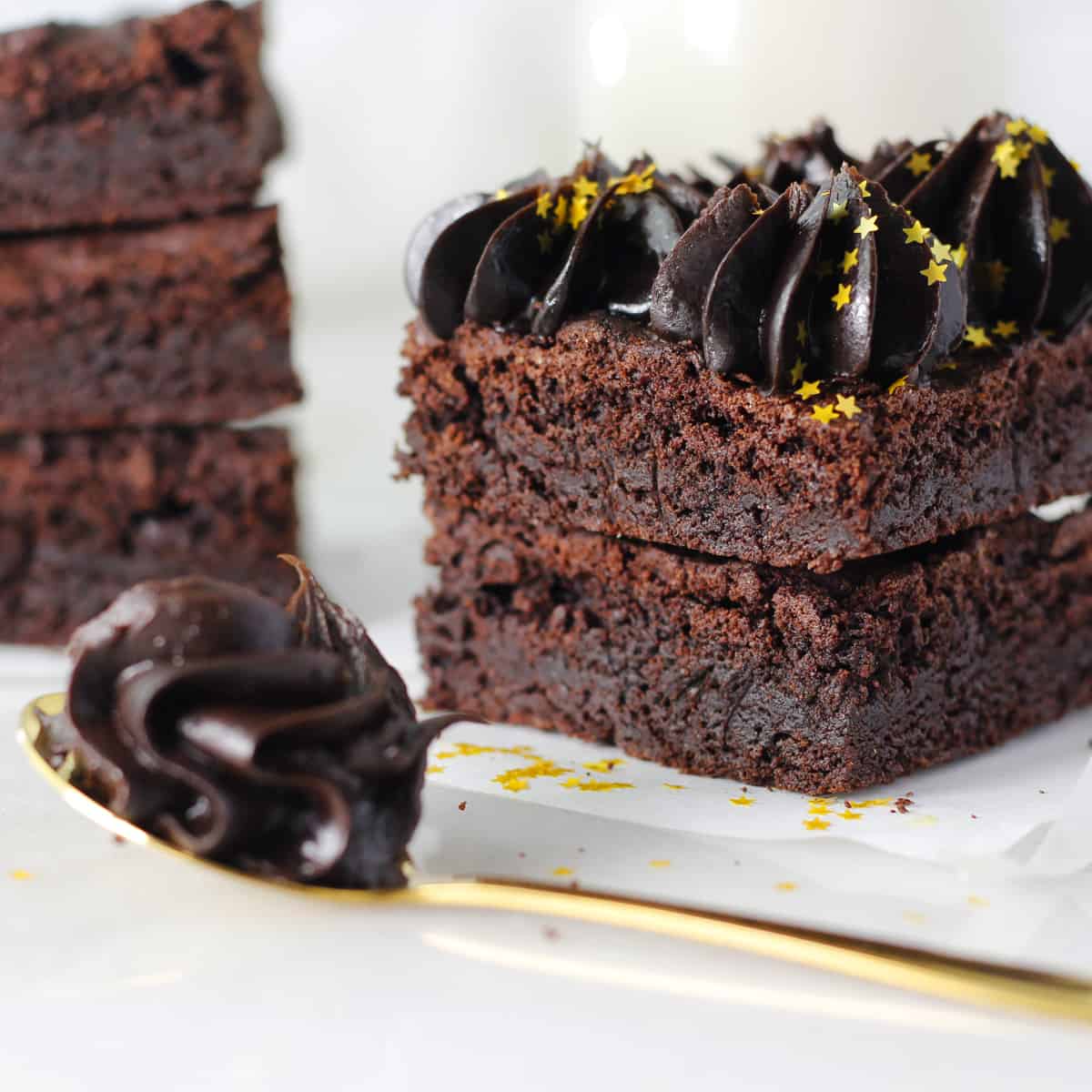 These gluten free brownies are both fudgy and cakey, and have an intense chocolate flavor thanks to both cocoa and melted chocolate chips. Eat them plain or top with a rich frosting. Chocolate Chips or  Chopped Chocolate - the quality of this chocolate influences the flavor and texture of the brownie so choose wisely. I always go with Enjoylife Chocolate Chips, or HU gems (refined-sugar-free), or Lindt 70% chocolate bar.

Aquafaba - the liquid straight out of a can of unsalted chickpeas. Or use flaxseed eggs - 2 tablespoon of ground flaxseed stirred into 5 tablespoon of water. Unsweetened apple sauce works fine too, just use ⅓ cup.

Cocoa Powder - I use dutch processed cocoa, Valhrona is my favorite. But regular unsweetened cocoa or cacao powder is fine, it just won't have as intense a chocolate flavor.

Flour - To make these gluten-free, I used GF flour. I make all my recipes vegan and dairy-free so I used vegan butter instead of dairy-based butter.

These brownies also have less refined-sugar then regular brownies because I used half coconut palm sugar which is healthier than brown sugar although it works and tastes the same.

I made them egg-free by using aquafaba instead of eggs. Aquafaba is the liquid from a can of unsalted chickpeas. I use WholeFood's organic 364 brand. I don't recommend Goya, too salty. Cool brownies 30 minutes at room temperature before removing from pan.

Store them in an air-tight container at room temperature for 2 days. After that, refrigerate for a week, freeze after that.

Brownies are such a popular treat, it makes sense that people who don't want to eat gluten should enjoy them too! Here are some questions people have regarding how to make them.

How Do You Know If Brownies Are Gluten Free?

To know if brownies are gluten-free, you'll need to know the ingredients. My recipe is gluten-free because I use almond flour instead of a wheat flour. I also made sure non of my ingredients were processed in a facility that also processes gluten products.

How Do I Substitute Eggs in Gluten Free Brownies?

As you see in this healthy vegan brownie recipe, I used aquafaba instead of eggs. Aquafaba is how you replace eggs in vegan recipes.

Basically 3 tablespoons of aquafaba, the liquid from an unsalted can of chickpeas, is equal to one regular egg.

You can also use ¼ unsweetened apple sauce instead of one egg.

How Do You Know When Gluten Free Brownies Are Ready?

This depends on the recipe of course. But in general you want to remove gooey brownies from the oven about 10 minutes sooner than you will remove cake-like brownies.

Either way, test the pan at the time and pull the pan out too early rather than leave them in too long. You don't want them to dry out and they’ll continue to firm up as they cool!

What Do You Put on Top of Gluten Free Brownies?

You can sprinkle the batter with gluten-free chocolate chips such as Enjoylife before baking, or you can frost after baking. To frost, make the ganache recipe I supplied, and pour it on a cooled brownie in the pan and chill it again for a clean cut.

You can also top brownies with chips sprinkled on before baking, frosting, salt and whipped cream or ice cream before serving. Chocolate is the primary ingredient in brownies, so it’s important to use the highest-quality chocolate you can get and afford.

PRO-TIP: Use a quality tasting dark chocolate like 70% lindt or Enjoylife Mini Chips and a quality cocoa, such as dutch process Valhrona. I promise this combo will bring you a better chocolate flavor than using regular cocoa powder such as Hershey's, and any baking chocolate.

That's because dark chocolate varies widely in flavor and Lindt and Enjoylife are known for being delicious, and dutch process cocoa has less acid - it makes it less nutritious than say cacao powder, but it will give your brownies a stronger, clear chocolate flavor.

Actually all the recipes on this blog can be made gluten free and I explain how in most recipes. But here are a few of my favorite chocolate desserts.