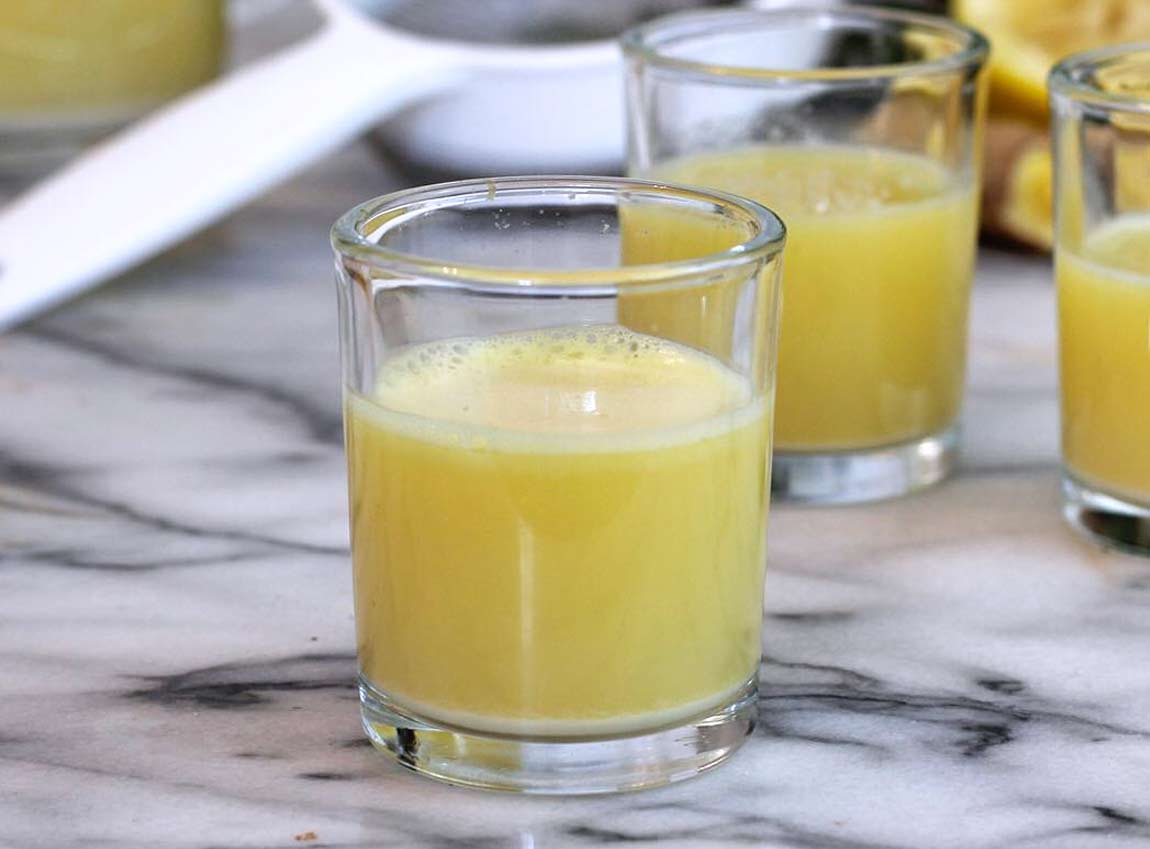 Ginger Lemon Blender Shot! Without a juicer! Sometimes there IS a quick fix!

And why would you want to take this daily? So many reasons - immunity, detox, even weight-control.

And you probably have seen these shots ready-made at the grocery store, right? Whole Foods and other grocery stores stock ginger-lemon shots by brands like KOR and JUS. But they are expensive - $3 at least for two ounces. Made at home in your blender, your shots will cost a fraction of that, even if you add in the optional cayenne pepper and coconut water.

Yes! Ginger, one of the most common ingredients worldwide, has long been used to solve medical issues, ranging from colds to hypertension. An NIH recent study on ginger says that in recent years the root has gained popularity - and rightly so - for its preventative and detox strengths.

And let's not forget the lemon. This bright citrus fruit kicks up your immune system as well and your vitamin C levels to lofty heights!

And both energize you! Easy to make, try it daily - before breakfast - especially in the winter months to boost immunity. But also try it as an afternoon pick-me-up. One of these shots at 3pm wakens my brain much faster than chocolate.(ok but I still love chocolate)

I know what you might be thinking. Isn't ginger is a bit burny going down? Yep, a bit, but not quite like chili peppers. If you want, chase down your shot with a glass of water, or even drink it diluted in an entire glass of water if that feels better.

Why is ginger so hot? It holds a substance called "gingerol" and yes, that is hot, but much less hot than the capsaicin found in searing chili peppers, according to the Royal Society of Chemistry. Plus the bright taste of lemon actually smooths the edge. I hope you give this recipe a try!

Add a pinch of cayenne pepper and use unsweetened coconut water to power up this recipe of ginger-lemon!

Cayenne pepper is known to boost metabolism, reduce hunger and even support digestive health. Meanwhile coconut water - unsweetened, fresh from the coconut version - is loaded with important nutrients that are often short in the average diet of today. Ginger-Lemon Shots Blender Recipe - Sometimes there IS a quick fix!

I'm Dee and I love converting traditional recipes into healthier recipes that use very few ingredients, and are vegan, gluten-free and dairy-free. Visit me on Instagram !