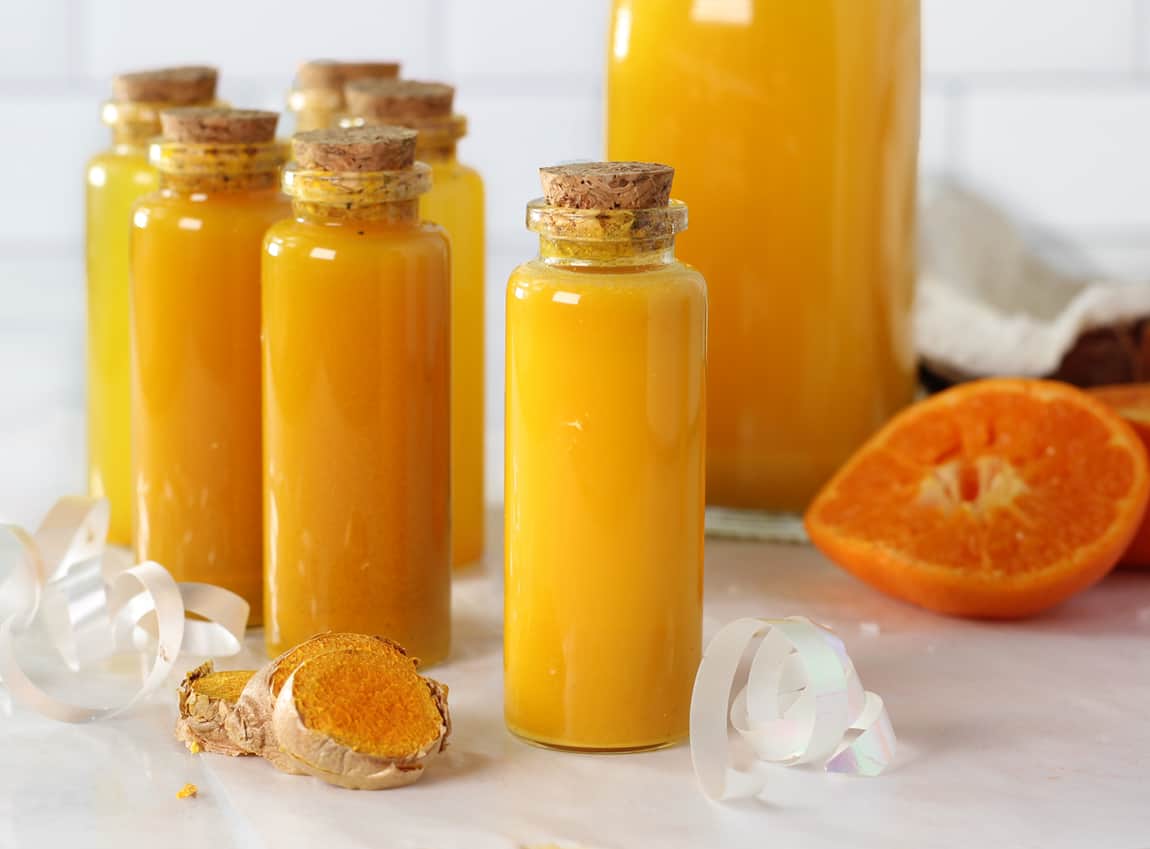 Wellness shots like Turmeric shots are popular mini drinks, about 3-4 ounces, for their ability to deliver a potent level of healthy nutrition that typically boosts the immune system, fights disease by reducing inflammation, and improve gut health.

You've probably seen them at the grocery store or even in juice bars, brands such as Kor and Vive. They come in various flavors and ingredient combinations for varied nutritional targets. I used to scoop them up when I saw deals, but they are expensive so I wanted to make them at home.

No, you need a juicer, said a college friend. Whoops! He was wrong. Within days of that conversation, I quickly developed three ways to make Ginger Shots in my blender and you can read that post here.

The first method uses fresh turmeric root found in the produce aisle of a grocery store, and a blender.

The second method is a shortcut and uses ground turmeric found in the spice aisle, and a jar.

Either way, you'll end up with a potent, immune-boosting, energy-hiking wonder of a shot. Let me tell you a bit more about why you'll want to make this shot.

What is Turmeric Spice?

Ginger shots are awesome, but so are turmeric shots. Turmeric shots contain turmeric of course, an orange spice that comes from a root in the ginger family. Turmeric is an ancient spice that Indian cuisines have enjoyed for thousands of years and Ayurvedic medicine has revered for its  ability to heal a myriad of conditions. In fact, turmeric has been used as a traditional medicine in some countries, including Indonesia where they call it Jamu.

This spice has become trendy in the last few years, appearing in everything from latte's to ice cream, because of it's health potential.

There is science behind this popularity. Turmeric contains curcumin which is a powerful immune booster. It also fights disease with a slew of anti-inflammatories, clears digestion issues, detoxes, improves blood circulation and more.

As a homemade shot, though, you can apply it's powerful health benefits pretty quickly and without a lot of fuss. How Often Should You Take Turmeric Shots?

Science shows you need to ingest about 500mg of curcumin a day to feel the wellness benefits turmeric is known for. One teaspoon of fresh or powered turmeric contains 200 mg of curcumin, so you'll need to ingest about 2 ½ tsp of turmeric to achieve that. You can do so with a supplement or make a turmeric shot as I provide here which shoots into your blood stream faster, and can be combined with other nutritious ingredients.

The most popular turmeric shots combine turmeric, fresh or powdered, with a citrus juice and a pepper. Here are the ingredients in my recipe:

Find the printable recipe with measurements below

How to Make Turmeric Shots in a Blender

You can make turmeric shots easily in a blender. Of course you can use a juicer, but you don't need such an expensive piece of equipment, just blend and filter the mixture for the same result.

Step 1: Wash and chop the turmeric root. You can peel off the papery skin a bit with a spoon but don't be too careful because you'll be filtering out the hard substances in this mixture.

PRO TIP - Turmeric stains fingers and cutting boards orange in color so I normally don't peel and use a washable dish as a cutting board. If your blender jar develops an orange hue, fill it full of clear water and add a few tbsp of bleach and let it sit for one minute then rinse or wash as usual.

Step 2. Juice the oranges. You can use fresh juice, not from concentrate if you prefer that over juicing fresh oranges. Oranges are important to offset any bitter flavor and of course oranges provide additional immune-boosting vitamin C.

Step 3. Add Ingredients to a Blender. Blend the mixture as smooth as you can. A high speed blender is best - such as Blendtec, Nutribullet or Vitamix, but a medium speed blender will also work.

Step 4. Strain the Mixture. Use a fine sieve to pour the mixture through, capturing the paper skin of the root and orange pulp. I typically use a rubber spoon to press on the mixture and squeegee out as much liquid as possible.

Step 5. Drink your Shot. Drink 2-3 ounces at once for most potent use. You can make it in batches however and refrigerate for up to 4 days before the wellness power begins to fade.

Step 3. Refrigerate and drink half immediately, and the other half within 24 hours for best potency. Yes, this method means your shot won't have as high a level of potency as the fresh turmeric version. But it is still quite potent. There aren't any scientific studies that show the difference in potency between fresh and powdered turmeric but it is clear there is a bit less between the two, so the solution is that if you use powdered, don't make it in advance, drink it within a day to capture full potency.

Watch the video on this page on how to make these shots step by step!

Tips for the Best Turmeric Shots

Use fresh turmeric if you can find the root. If not, use powdered turmeric. I provide measurements for both in the recipe.

If the taste if too burny because of the pepper, chase down the shot with a glass of water.

You can use cayenne pepper if you don't have black pepper. I provide measurements for both in the recipe.

You can use pineapple juice instead of orange juice. Pineapple juice will provide additional anti-inflammatory effects to help with sore joints. Interested in more joint support? Try my Pineapple Smoothie. Shortcut Version: Use Powdered Turmeric : Make Shot in A Jar

I'm Dee, and I make healthy dessert recipes that often include hidden veggies. All are vegan, gluten-free, dairy-free and egg-free. Visit me on Instagram where I post new recipes first!