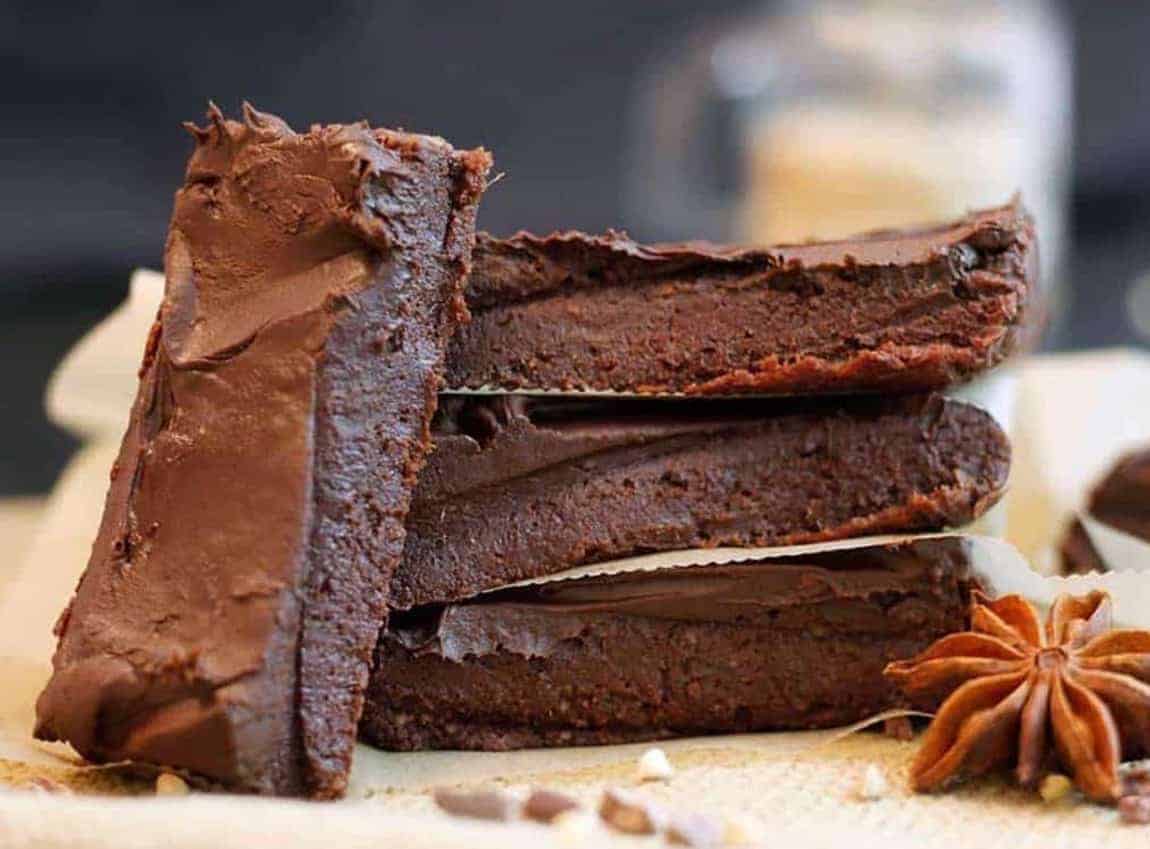 I called these fudge brownies, brownies but they are closer to fudge really, so maybe I should call them "frownies" or "budge"? Haha, but somehow neither of those names covers the deliciousness of these.

For brownies that are basically fudge, the secret is in the infused nuts. Here are the basic ingredients I used.

Nut butter - I used almond butter, but any nut or seed butter is fine.

Mesquite powder - a wonderful root supplement that has awesome nutrition, tastes like molasses, but can be left off.

How to Use Fudge Brownies

This nutritional chocolate snack is perfect for:

How to Make Fudge Brownies

My detailed recipe is at the bottom of this post, but here are the general steps.

1. Soak the walnuts and dates in milk containing mesquite powder or just milk. Strain the nuts and dates, but DO NOT RINSE THEM OFF. Save the milk for OTHER recipes, do not use it in this recipe.

2. Mix up all the ingredients into a dough

4. Refrigerate about 1 hour, and frost.

Fudgy brownies have more fat. In traditional brownie recipes, that usually means butter. But in my dairy-free recipe here it is almond butter. And in my recipe, dates also are used to give the illusion of more fat, while actually adding nutrition and fiber.

Are Fudge Brownies Supposed to Be Gooey?

Well, mine are more creamy then gooey.

How Healthy Are These Fudge Brownies?

Very! They are great for cognitive function, sleep support and blood-sugar control among other boosts. It starts with the base ingredient, cacao powder.

How Healthy is Chocolate

Cacao powder is raw chocolate, and so much healthier than cocoa which is heat-processed. It is known to supply magnesium which, in the course of the day, supports your ability to have a healthy night's sleep. It also boosts your mood. But cocoa powder also provides nutritional benefit, just a touch less. I often use cocoa powder when I don’t have cacao powder on hand.

The recipe also holds fiber-filled medjool dates, walnuts and nut butter full of protein and other nutrients. My favorite ingredient in these brownies however is the Mesquite powder.

What is Mesquite Powder?

First off, I want to tell you that these brownies will taste fine without the mesquite powder so don’t worry if you don’t have it in hand. However, try it someday, here’s why.

Mesquite powder is a super food, although I don't often use the term super food. When I use the term, I am describing a rather unusual ingredient, often a powder from a plant, that provides extraordinary health benefits.

Mesquite powder comes from ground up pods from the mesquite tree, a tree native to the hot dry areas in southwestern United States.

It is a wonderful addition to smoothies and chocolate treats because it tastes like molasses and is a bit sweet, allowing less sugar to be used in the recipe while still keeping it sweet.

Best of all, though, it is super high in amino acids, specifically the essential amino acid lysine, as well as vital nutrients including potassium, iron, calcium, magnesium, and zinc.

Of course, you can eat them any way you want, but I like to pop these brownies to boost me out of the 3pm slump - something I used to use coffee for!

And sometimes I add a tbsp of cinnamon to the recipe, to balance out the blood sugar levels. I hope you enjoy my fudgy brownies!