This chocolate puffed quinoa scotcheroos recipe is a healthy twist on the classic rice crispies recipe. Protein-rich puffed quinoa or your favorite puffed cereal in a bar that is vegan, gluten-free, dairy-free and refined sugar free. This healthy take on the traditional rice crispie or scotceroos treat is full of healthy whole foods. And it is easy to make, so pretty quickly you can have a snack that is a wonderful energizer, mood-booster, and energizer! The beauty of this recipe is it results in a sweet treat, that is powerfully nutritional, with a healthier cereal at center stage.

What Are Rice Krispie Bars?

Rice Krispies is an iconic puffed rice cereal by a USA food manufacturer, popular in the later 1900 decades. It was used in a bar recipe that involved gluing the cereal together in bar form with marshmallow. Fun to eat, but full of sugar.

This version is healthier, glued together with mineral-rich maple syrup and not that much of it. Of course, it is all topped with a magnesium-rich healthy chocolate. And a nutritional bonus if you use a healthier puffed cereal like kashi or even quinoa.

How Healthy is Quinoa?

Quinoa is a gluten-free pseudo-grain considered a superfood these days, because of its strong and unusual nutritional profile.

Pronounced "KEEN-wah", quinoa is one of the few plant foods that offers a complete protein profile, all nine of the essential amino acids. Essential because your body cannot produce them on its own. Quinoa is also high in fiber, iron, zinc, copper, thiamin and vitamin B6, potassium and magnesium, phosphorus, manganese and folate. One cup of quinoa yields 8 grams of protein and 5 grams of fiber.

Quinoa is so incredible that NASA scientists are considering quinoa as the crop to grow in outer space, because of its high nutritional content, and ease of growing. My favorite aspect of quinoa is that it retains its powerful nutritional profile no matter what form it is in. So here, in this recipe, I used commercially-popped quinoa, an airy bubble that is produced with a certain compression technique. You can't do this at home; you have to buy quinoa popped to this size.

And here is my favorite popped quinoa brand... You can also try to home-pop quinoa. Just dry saute it until you hear faint popping, and it turns brownish, and smells nutty. The problem is home-popped quinoa is very small, doesn't explode like the airy popped quinoa used here, so your bar will be denser and more snappy. To get it to the height you see here, you'll have to triple the amount of popped quinoa!

So if you can't find puffed quinoa, and don't want to home-pop, use a kashi cereal instead. Here is my favorite, accessible on Amazon! Another name for these treats is scotcheroos. Scotcheroos are a snack bar recipe published on a commercial cereal box in the 1960s. They were made with chocolate, butterscotch syrup, peanut butter, and Rice Krispies. Want to learn more about this iconic recipe? Visit Wikipedia here. So, as you can imagine, however, my version is a healthifed form of this recipe.

How to Make This Healthy Scotcheroos Recipe

Melt up the nut butter and maple syrup either in a double boiler or in the microwave. Stir in the vanilla and salt, and fold in the popped quinoa. Spread into a parchment lined pan, and refrigerate for an hour. Melt up the chocolate, pour it on top, and refrigerate until solid, about an hour! Cut with a hot knife and you have yourself some healthy quinoa scotcheroos, or healthy rice crispie treats without the rice.

And Check Out My Other Vegan Recipe Favorites 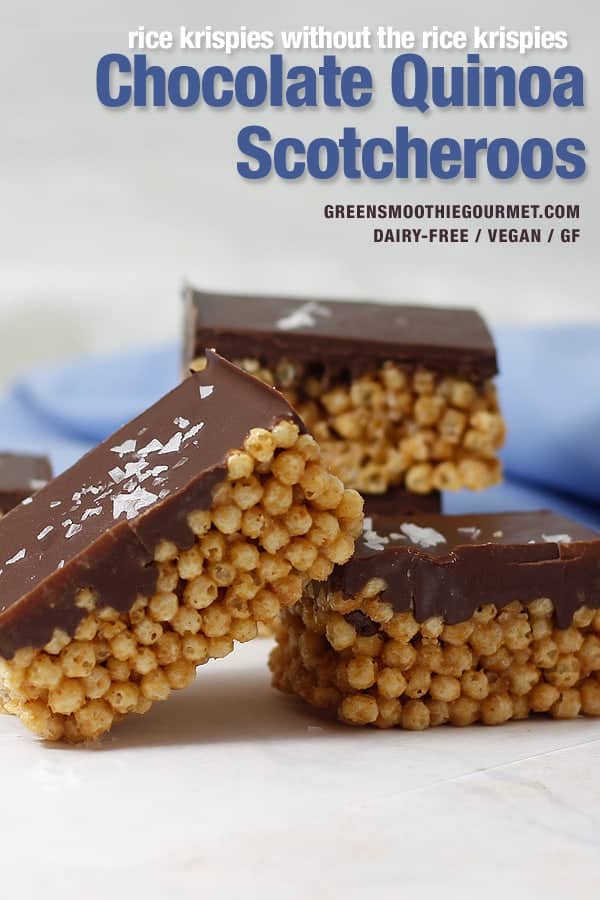 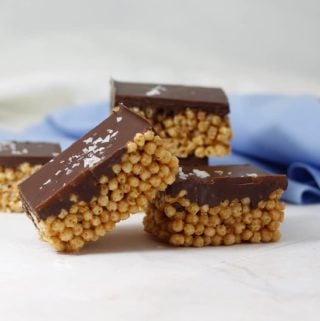 Created by Dee Dine
A healthy scotcheroos recipe using protein-rich quinoa instead of a rice cereal. It can also be made with a healthy kashi cereal. And it is easy to make, so pretty quickly you can have a snack that is a wonderful energizer, mood-booster, vegan and gluten-free!
5 from 3 votes
Print Recipe Pin Recipe
Prep Time 10 mins
Cook Time 1 hr
Total Time 1 hr 10 mins
Cuisine vegan, dairy-free, gluten-free
Servings 9

I'm Dee, and I make healthy dessert recipes that often include hidden veggies. Some savory recipes too! All are vegan, gluten-free, dairy-free and egg-free. Visit me on Instagram and subscribe to my Youtube Channel!