This easy apple cranberry crisp is quick and healthier than the traditional version. And this crisp boasts a delicious crust that is high in protein. And a crust and topping that is full of fiber. The entire recipe is dairy-free, gluten-free, free of refined sugar, and suitable for vegan, vegetarian and paleo diets! 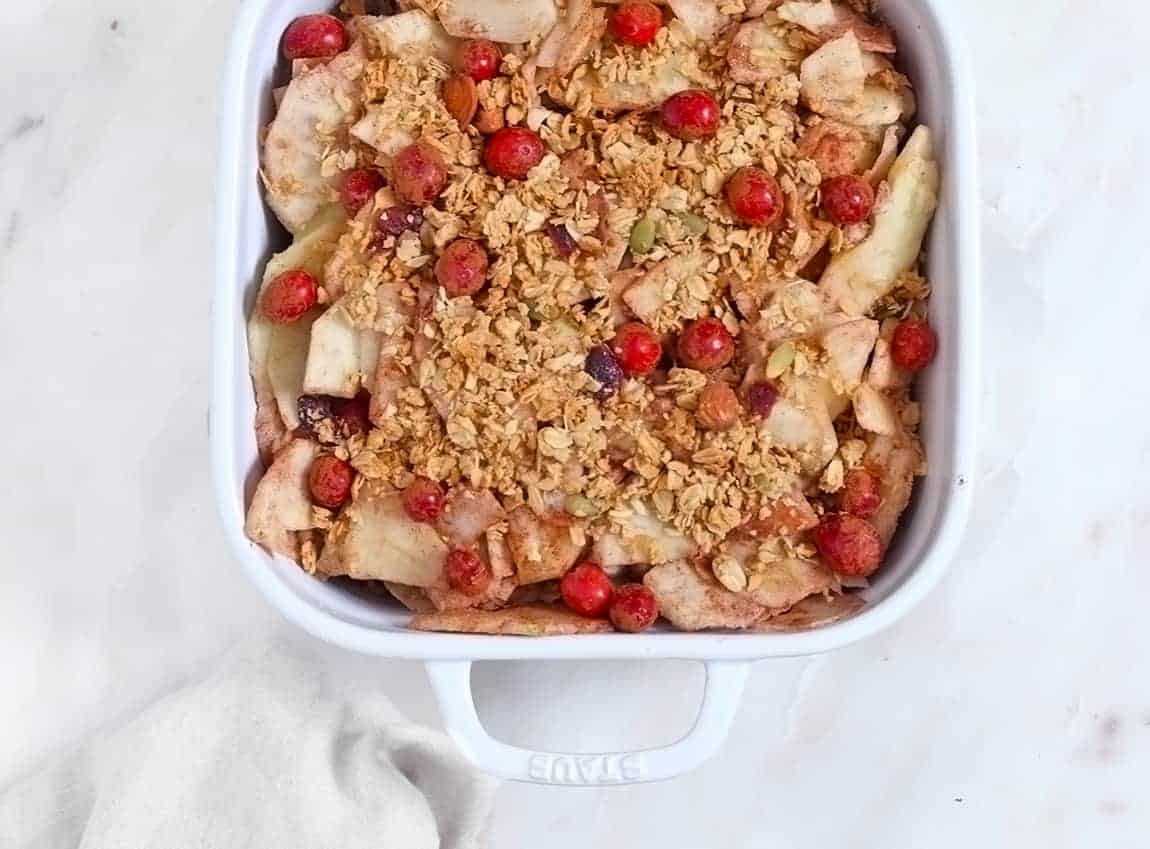 This easy apple crisp is the fastest crisp I've ever made. Mostly because the ingredient list is so short.

And while a traditional apple crisp recipe involves butter or oil, added sugar, and more, this recipe does not. Those recipes are delicious, sure, but maybe you don't want to add butter or oil today?

Maybe you are trying to cut down on refined sugar? Perhaps you need to make an apple crisp fast and of lower calories than most?

Then this recipe is for you!

How is This Easy Crisp Made?

The typical crisp has a fruit layer and a crumble layer and you serve it on something, like ice cream.
This apple cranberry crisp has three layers, so you don't have to serve it on anything. It can stand on its own. A kind of a one-stop-shop apple crisp.

Let's look closely at the anatomy of this easy recipe.

1. The Crust. Yes, this apple cranberry crisp has a crust. And that crust is composed of almond flour (or your favorite flour), granola, apple sauce and cinnamon. It is not necessary to bake it before the entire crisp is baked, and it is high in protein and fiber.

2. The Fruit Filling. The fruity filling is a mix of fresh cranberries, and fresh, sliced apples. Since fresh cranberries are only available in the fall, frozen is also fine to use, just thaw before adding them to the recipe.

Regarding the apples, either peel or not, but the peel has fiber so the apples are more nutritious unpeel. I peeled mine for photographs, haha. Just be sure to buy organic. The ewg.org lists apples as highly receptive to insecticide absorption so you'll want to buy those that are not grown with chemicals.

3. The topping. Ahh, yes, the quintessential topping on a crisp evokes all the fall feels - spicy, crunchy, fruity, with hints of the holidays to come. So what are my ingredients in my apple crisp topping? 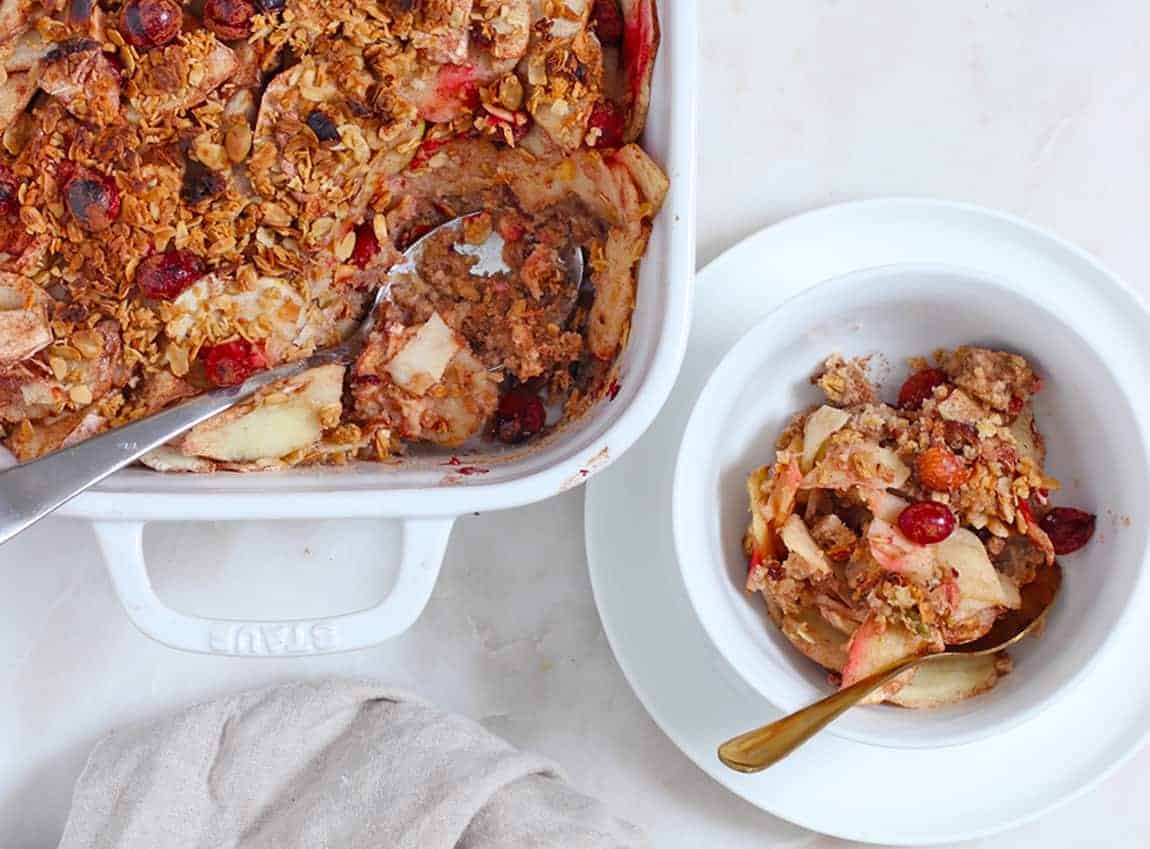 About the Cranberry Apple Granola

Yes! It totally works! And actually this whole recipe enhances the fall flavors because I include this granola in the crust as well. And can you guess what brand cranberry apple granola I used? Yep, Bob's Red Mill.

Why this granola? Because Bob's Red Mill has released an incredible new product, a new granola that is actually pan-baked. It's also gluten-free, non-gmo, and sweetened with maple syrup. And yet it is not too sweet, only 7 gms of sugar in ¼ cup, low for a granola.

Bob's Red Mill has released several flavors of this new pan-baked granola but I used cranberry almond flavor in this recipe. It pairs beautifully with the fresh cranberries and apples in the filling. And it is full of protein and fiber!

Questions Answered About This Easy Crisp

It is definitely better the day it is made because the granola softens after a while. But if you don't mind that, refrigerate it covered for several days, and warm before serving.

2. Can you swap out granola flavors?

Of course! Use your favorite and whatever pairs well with cranberry and apples.

Well you can, but then we would have to change the name of this recipe, haha!

4. Can I top it with a traditional crumble instead of granola?

Of course, if you want a more traditional crumble top, just double the crust recipe, and use that as the crumble top! Add a bit more granola and flour to dry it out a bit more, and use a fork to "crumble" the texture before sprinkling it on top of the fruit.

Overall, this recipe results in a high-protein and low calorie treat that makes the home smell incredible while warming and is a wonderfully tasting and colorful treat for brunches, snacks and desserts calling for this fall recipe classic. Other Fall Recipes To Consider

I top this crisp sometimes with my crystallized ginger recipe. It turns out so glittery, it is perfect for when you need a fancy dessert.

And here is another recipe that uses granola, a chewy homemade granola bar!

And since we are talking apples recipes, you might want to check out my apple cider overnight oats recipe. It is one of my most popular Pinterest shares for some reason, haha. Created by Dee Dine
This easy apple cranberry crisp is quick and healthier than the traditional version. And this crisp boasts a delicious crust that is high in protein. And a crust and topping that is full of fiber. The entire recipe is dairy-free, gluten-free, free of refined sugar, and suitable for vegan, vegetarian and paleo diets!
5 from 4 votes
Print Recipe Pin Recipe
Prep Time 20 mins
Cook Time 40 mins
Total Time 1 hr
Cuisine vegan, dairy-free, gluten-free
Servings 12

This post is sponsored by Bob's Red Mill. My opinions are my own.

I'm Dee and I love sharing healthy simple recipes with few ingredients and lots of hidden veggies. My recipes are vegan, gluten-free, vegetarian, paleo, dairy-free, GF. DM me on Instagram !