These baked apple cider donuts are healthier, made with pumpkin puree as one of 6 main ingredients. No eggs, no oil, no dairy. Light, fluffy and loaded with apple cider flavor! So sweet and spicy these will easily be your favorite homemade vegan apple cider donuts ever. Step by step video! 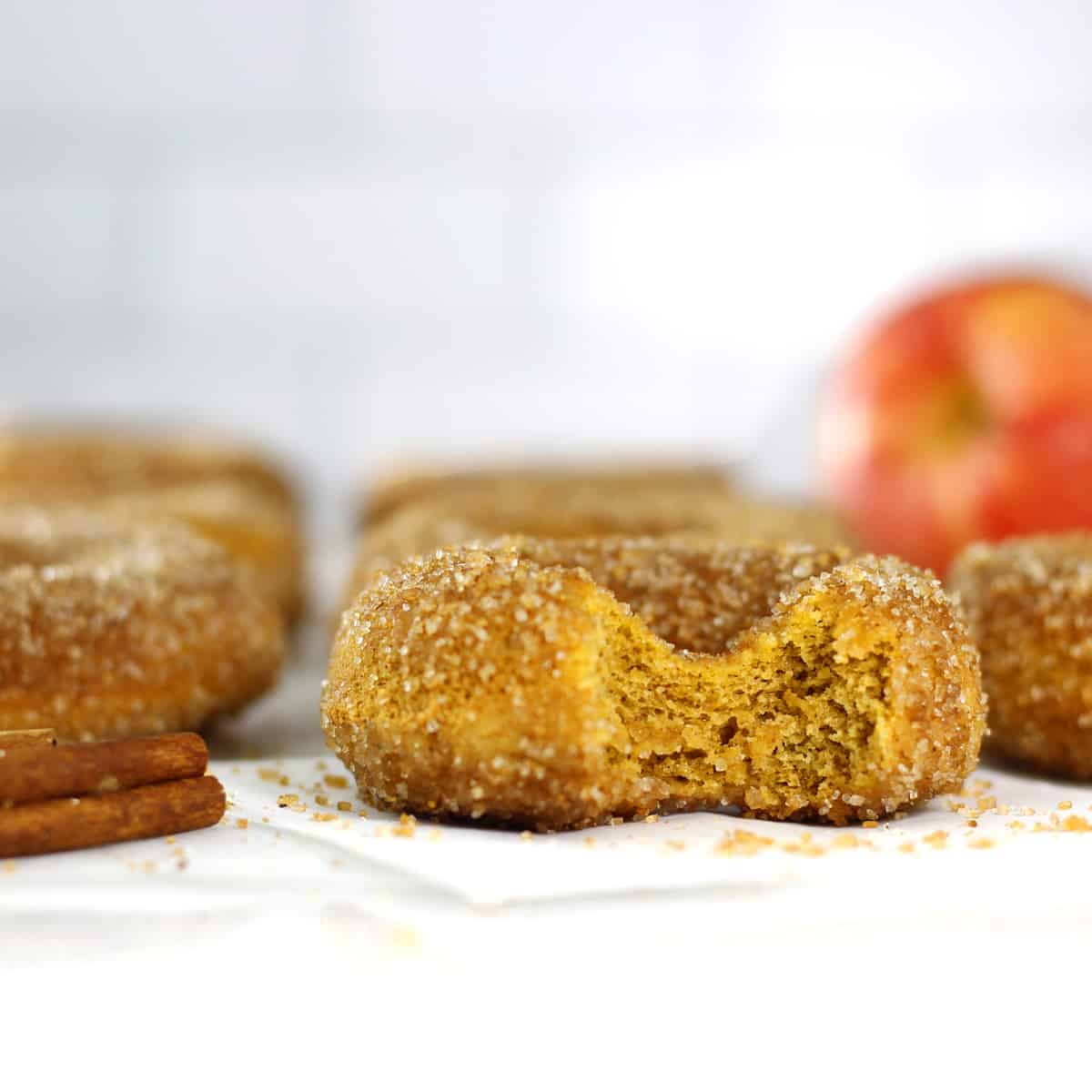 These apple cider donuts are healthier, easy to make with 5 main ingredients, spicy and sweet, vegan and gluten-free. Plus you get a veggie in your dessert.

It's one of the easiest apple cider donut recipes there is because you just mix, bake and coat! For donuts, you'll need a donut pan, but you can also make these in a muffin tin.

How Do These Baked Apple Cider Donuts Taste?

These apple cider donuts taste soft and spicy, and rich with the apple cider flavor, supported by apple pie spices. Although I used pumpkin puree instead of oil, you don't taste pumpkin flavor at all, only apple. 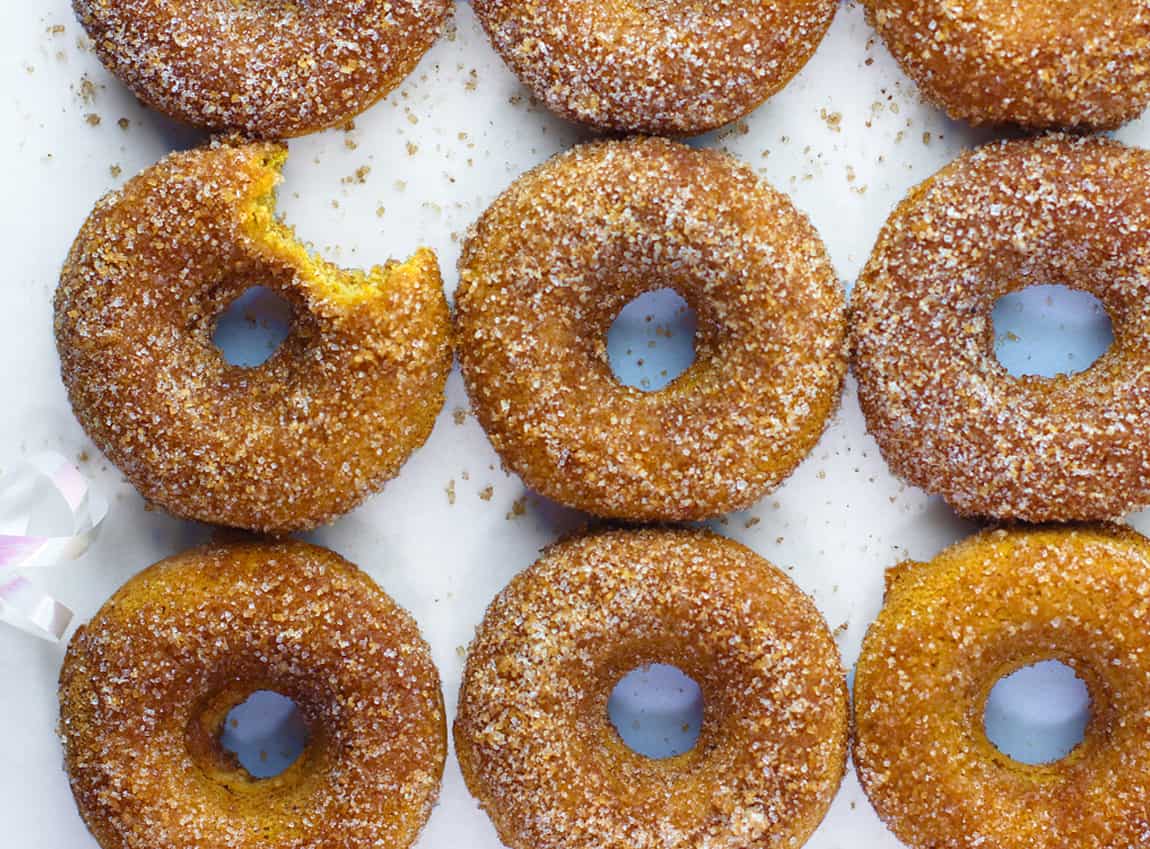 How Healthy Are Apple Cider Donuts

Of course this donut contains sugar but the rest of the ingredients are wholesome and contribute nutrition including oat flour and the veggie puree.

Each donut contains 6g of protein, and 3g of fiber, as well as iron, calcium and even vitamin C thanks to the veggie puree.

My recipe is different than most because I use pumpkin puree instead of oil and this gives a delicious moist structure as well as tons of nutrition. That's not something you can say about most donuts.

My apple cider donuts are vegan, naturally gluten-free, eggless, dairy free, nut free. Adults and children alike will love these whether they are vegan or not.

Apple Cider: One of the most important ingredients in apple cider donuts. Use as fresh and pulpy and quality cider as you can. Do not reduce your apple cider (boil it down to remove some water) because the liquid balance in this recipe is perfect. In fact, if you reduce, you'll reduce the sweetness and apple flavor so I don't recommend it here.

Pumpkin puree: This is a wonderful instead of oil, and brings strong nutrition for the eyes. Use pumpkin puree from a can or puree down fresh steamed pumpkin. You can substitute sweet potato puree or even butternut squash puree for this recipe. Or even unsweetened apple sauce.

Flour: Use oat flour as it's naturally gluten-free and brings a lovely donut shop flavor to baked goods. You can buy oat flour or use a blender to grind rolled oats into flour. In this recipe, all purpose flour or 1 to 1 gluten free baking flour also work, just use ½ cup less flour than the recipe calls for.

Sugar: You can use coconut palm sugar or cane sugar.

Spices & Leaveners: Of course we need a spice blend. I've used both apple pie spice blend and pumpkin spice blend to make these donuts taste deliciously like fall. The leavener is baking powder. Don't forget vanilla and a pinch of salt. How To Make Apple Cider Donuts

What sets these apple cider donuts apart from other recipes is using pumpkin puree instead of oil. It lightens the donut texture and even gives it a lovely fall color.

My full and detailed recipe with measurements is below, but you can read through the main steps here.

Step 3. Pour the wet mixture into the dry mixture and use a hand mixer to combine until smooth.

Step 4. Add the mixture to a piping bag or ziplock bag with tip cut off. Use that to fill a donut pan. Fill wells to the top.

Step 5. Bake for 12 minutes, or until a tester comes out clean. Cool pan for 10 minutes, then transfer to a cooling rack. How to Make Baked Donuts Without a Donut Pan

To make these donuts without a donut pan, use a muffin pan lined with paper. I fill wells about half way, and dip into the cinnamon sugar mixture once done. Bake muffins at 350 F for 15 minutes.

Why Are They Called Apple Cider Donuts?

They are called apple cider donuts because the liquid in the recipe is apple cider. If you don't have apple cider, apple juice concentrate also works in a pinch but the apple flavor won't be as strong.

I'm not sure but it is so easy to make homemade apple cider donuts, it really doesn't matter, does it?

How Many Calories in a Baked Apple Cider Donut?

Less then 180 calories in my apple cider donuts. They are also high in fiber and low in carbs.

My donuts are an easy donut recipe with apple cider as the liquid.

Yes! My baked donuts definitely taste like your favorite fried donuts especially with the sugar cinnamon coating. But they are baked and have no oil! So much healthier and lighter. Feel great after eating more than one! 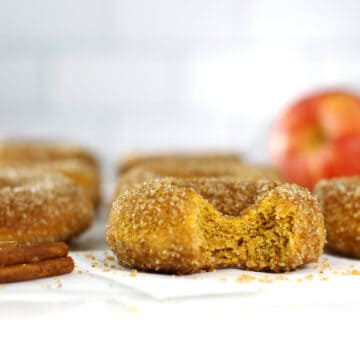 To Make as Muffins