Funny exotic spiky Kiwano makes a healthy smoothie that is a perfect base for a refreshing, hydrating smoothie with cucumber, green grapes and lime for more flavor. An exotic kiwano smoothie, a fresh tart drink based on sweet kiwano melon. Teamed here with kale, cucumber and Chia seeds, the result is a hydrating powerhouse. Definitely deserving of a place on the table for green goddess-type smoothies, nutritionally supportive of skin, hair and nails.

In fact, as I write this, my daughter wandered in to informed me that drinking water is not actually the best way to hydrate, so I am glad to see my interests are rubbing off on her..

All About the Kiwano Melon

Well, this smoothie is a great way to hydrate, so we make it every time we see the cute little yellow orange Kiwano melons appear in the grocer's exotic fruit area. And that is generally when it is summer in New Zealand, which is where it is currently cultivated. It's native to Africa's Kalahari dessert.

I think it looks like a blowfish, doesn't it? In fact, it is so futuristic looking, it has won a part in various sci fi television series', including Star Trek and Terra Nova.

Nutritionally, a single kiwano contributes a fair variety of essential nutrients, including vitamin C, A, B6 and Iron. And it is fairly high in protein for a fruit, according to Healthline.

How to Eat a Kiwano Melon

I love the taste because, depending on how ripe it is, it reminds me of a cross between a cucumber and a kiwi. And once we mixed it with lime and mint in an infused water, yum!! It does sweeten considerably as it ripens so if you prefer a tart taste, get to it early.

How to Make a Kiwano Smoothie

This is actually quite easy. Choose a kiwano that is firm but not squishy. Rinse it off, slice in half and spoon the seeds and meat into a blender. Add to that your other smoothie ingredients, blend, chill and enjoy!

This smoothie is a variety of delicious whole foods including kale, peeled cucumber, green grapes for sweetness, yogurt, lime juice and chia seeds. Adding in mint and lime is a good way to freshen the flavor further. 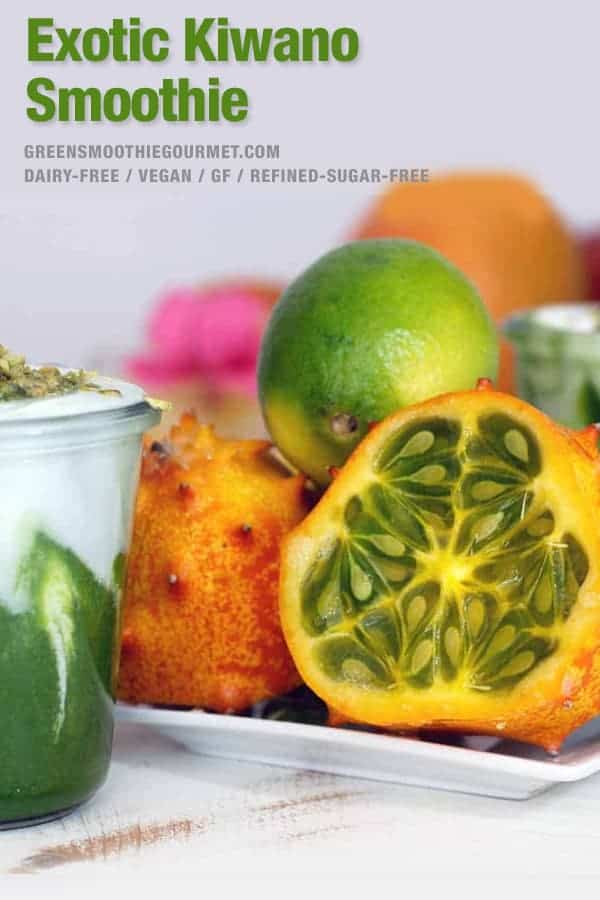 Dee Dine is founder of Green Smoothie Gourmet, a plant based recipe blog, and author of two recent cookbooks, Crazy Healthy with 4 Ingredients and the immunity-boosting smoothie /juice/wellness shot book, 4-Ingredient Smoothies + Juices . On this blog you'll find incredibly healthy easy recipes with hidden veggies for anyone wanting to eat healthier, regardless of diet. Dee has graduate degrees in sciences and journalism, editor at The Feedfeed and a nutritional expert at WikiHow. More about Dee Dine here.

I'm Dee, making your favorite recipes with healthy and VERY few ingredients, and always vegan, gluten-free, dairy-free and egg-free. Visit me on Instagram !