These easy frosted brownies are vegan, dairy-free, gluten-free option, and topped with a melt-in-your-mouth chocolate fudge layer and brightened with chocolate rainbow sprinkles. Frosted brownies are a step up from ordinary brownies, and a step I'm happy to make. My brownies are fudgy, vegan, dairy-free, gluten-free if you choose a gluten-free flour and have lots of nutrition you don't ordinarily find in a brownie.

The brownie is so chocolatey in flavor, you won't believe that first bit.

And then there is the frosted top, a velvety, melt-in-your-mouth layer of coconut cream and dark chocolate.

The recipe is fairly easy, just about one bowl, and only require baking for 25 minutes and bit of chilling.

Before we dive into the recipe, I'd like to invite you to sign up for my free chocolate course. Five lessons hit your inbox with detail on how to create your own simple healthy chocolate desserts.

Are you ready to take your brownies up a notch? 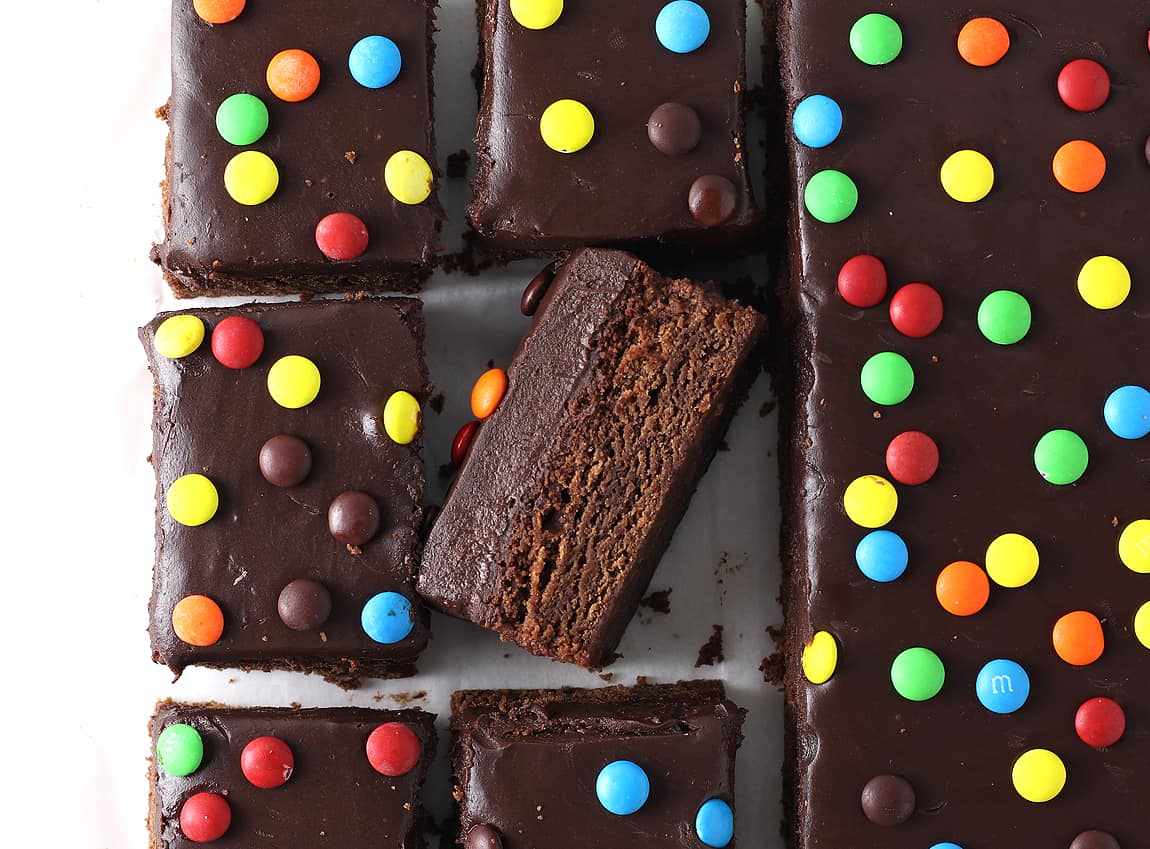 How to Make Frosted Brownies

Start with the brownies. Melt up butter and unsweetened chocolate in the microwave, then add in all other ingredients.

Mix in other ingredients, bake and cool. The frosting is even easier. Just microwave the coconut milk and chocolate chips together, and pour this delicious dream straight onto the cooled brownies.

A chilling in the refrigerator will allow you to slice cleanly. 1. Be sure your can of coconut milk is at room temperature. And to further blend the solids within, I sometimes heat the milk quickly in a pot and stirring to smooth it out before making the brownies, to allow it time to cool before I need to make the frosting.

2. Also note that you need two types of chocolate for this recipe: unsweetened baking chocolate and semi sweet chocolate chips for both the brownies and the frosting.

3. Chill the frosted brownies about 30 minutes in the refrigerator to allow a clean slice with a knife. After that, I like to keep them refrigerated so they last longer, about two weeks.

How Are These Frosted Brownies Healthy?

Well they still have flour and sugar so they are not a vitamin. However, they use flax seeds and coconut milk and have lots of cacao. Let me explain:

1. Flax seeds are high in fiber so great for digestion, and studies show they have a positive impact on blood cholesterol.

2. Coconut milk is so nutritious, including essential nutrients that are hard to find in other foods including manganese and copper. And although coconut milk is fairly high in fat, the fat is considered "good" fat, being mostly medium-chain triglycerides which are thought to promote weight loss ironically, and improve gut environment.

3. And then there is the dark chocolate. The unsweetened chocolate in the brownie has 100% cacao, and the semi-sweet chips in the frosting have 70% cacao. High cacao levels are associated with many healthy benefits, including immunity boosts from antioxidants, lower blood pressure, improve sleep and digestion from magnesium, and more.

So, are these brownies healthy? Well, I'd say these are the brownies you want to be passing around to your loved ones.

Do Frosted Brownies Need to Be Refrigerated?

Yes because of the frosted top. The refrigeration keeps the top solid and fresh. And the brownies taste better chilled in my opinion. However, if you don't frost these brownies, they will be fine, covered at room temperature for about 3 days.

What Do You Put On Top of Brownies

I make this luscious frosting, but you don't have to. The brownies are awesome alone, or topped with ice cream or even yogurt!

How Long Should I Wait to Frost Brownies

Definitely wait until the baked brownies are cool. For me that was about 30 minutes.

Why Did My Brownies Turn Out Dry?

It's probable that you measured the flour so you added more than the recipe called for. To avoid dry brownies or any baked goods really be sure you are measuring flour correctly.

You don't want to dip your measuring cup in the flour bag, and scoop - that will pack the flour so there will be too much even though it looks measured correctly. I have on occasion used a scale but I find that most people don't have a scale in the kitchen, so I recommend a useful trick to get the flour right.

1. Take a fork and fluff the flour in the bag. Use a spoon to lightly fill your measuring cups with the measurements according to the recipe.

2. Overfill ever so little, and tap the side of the measuring cup over the flour bag to get the top to even off and the excess spill back into the bag, or collect it on a dish.
This is a method that will help you avoid adding too much flour to a recipe and drying it out.

So are you ready to take your brownies up a notch? Add frosting!