A healthy cauliflower smoothie with the nutritional boost from hidden veggies - not just cauliflower, cucumber and even white mushrooms too! Yet still this pink dairy-free drink tastes like a bright tropically fruity milkshake. Cauliflower, is there anything you can't do?

Who would have thought just a few years ago that this very understated - some might say boring - vegetable would be taking the culinary world by storm. It's now used in so many healthy cauliflower recipes! It's the main ingredient now in pizza crusts, rice, burgers, even steaks! And there are many more examples.

So finding cauliflower in smoothies and milkshakes is actually a bit less surprising, right? Because actually we have all been hiding vegetables in smoothies for quite some time. Amirite?

Things like avocados, zucchini, mushrooms, beets, etc. The list of veggie smoothies is getting longer by the minute.

This smoothie however, stands out a bit because there are two hidden veggies in here, not just one. Both a bit unusual for a smoothie.

Can you guess one of them if I give you clues?

It's green, and hydrating and full of vitamins and antioxidants. Also, most commonly found in salads. Can you guess?

Other Ingredients to Thicken Smoothies

Cucumbers are perfect at thickening smoothies.

So why didn't I call this smoothie Cauliflower CUCUMBER Smoothie? Well, because I think the idea of cucumbers in smoothies might sound a bit too green. And I did not want to risk putting people off before I have the chance to explain.

Like cauliflower smoothie is more assuring? she says sarcastically. Okay, admittedly, my logic might be a bit off. Anyway....

To explain that this creamy fruity smoothie tastes like a decadent tropical drink that might be served sporting a tiny umbrella at a resort's beach-side thatched cafe.

Because while it is true cucumbers tend to have a strong green flavor, they don't in this smoothie. And that, my friends, is because I peeled them.

You don't have to, of course. Especially if you buy organic. But for this smoothie I recommend it.

Other veggies that thicken? You can guess probably, but I'll share - cauliflower, zucchini, white mushrooms and avocado. No need for bananas in smoothies if you don't want them, right?

How Healthy Are Cucumbers?

Peeled cucumber contains protein, vitamins, folate and b vitamins. And as you probably know, it's incredibly hydrating.

Cucumbers also contain fiber, although leaving the peel on is a better source of fiber. The peel however can be bitter, so it's not the best way to add it to a smoothie.

Plus I wanted a pretty pink color without any sign of hidden veggies. My three girls are okay actually with green smoothies. Actually so is our dog! But mr. greensmoothiegourmet is not so keen.

And if you leave on the peel, it is best to buy organic because cucumbers are 16th on the list of 47 veggies and fruit, with number 1 having the highest level of pesticide residue found in fruits and vegetables, tested by the EWG.

You can choose any type of cucumber, but I have a soft spot for English cucumbers. Why? Because they have fewer seeds and more "meat" inside.

They are also long, and the skin is thin which is why you'll always find them shrink-wrapped in the grocery store. Learn more about general cucumber nutrition here.

And this smoothie also has two mushrooms, the white variety to keep it pink! Mushrooms are a fun addition if you have them because they contribute many minerals and vitamins, including copper, potassium, magnesium, zinc and B vitamins such as folate. So do the fruits we add here.

I often make it with strawberries and another ½ cup of a fruit that will make it sweeter. In fact we have used to sweeten mango, kiwi, cherries and more! So much nutrition, and so little time, haha.

How Healthy is Cauliflower in a Smoothie?

Cauliflower is incredibly healthy. No wonder people are putting it in everything.

It's super high in fiber and B-vitamins. And a recent NIH study found that the stuff is full of antioxidants and phytonutrients that can protect against disease. And it has a ton of fiber that supports weight-loss and digestion. But that's not all.

It also has some very hard to find nutrients, including choline, so essential for cognitive functioning, including learning and memory. For this last alone, cauliflower is perfect to add to a morning smoothie, don't you think?

How Healthy are Berries?

Berries carry all the nutritional benefits inherent in berries! Most notably is their support of cardiovascular processes. Read up on that here.

But be sure to buy berries organic - always! Frozen or fresh. This is very important when using strawberries particularly because the EWG typically finds strawberries are the fruit with the most pesticide absorption [source].

While we are talking smoothies, I'll just pop in here and invite you to my FREE 6-Day Smoothie Challenge. I email you recipes and you make them, drink them and feel awesome. Sound good?

How does this Cauliflower Smoothie Taste?

Well, tropical! It tastes like a tropical milkshake! There is no cucumber "green" flavor and the cauliflower leaves no taste at all, only a creamy dreamy texture. And the mushrooms disappear! Love mushrooms of course, but not necessarily want to taste them in my smoothie. And the addition of mango in this one really brights up the flavor and makes it tropical!

How to Prepare Cauliflower for a Smoothie

You can prepare the cauliflower in two ways for this tropical smoothie.

One, you can boil or steam fresh cauliflower and then mash it up with a fork. Then refrigerate it until cool before adding to a smoothie.

Two, you can simply "rice" up raw cauliflower in a food processor or blender. And add that directly to the smoothie before blending. This second way might be a bigger challenge on the digestion, just as any raw vegetable is. So if you are sensitive, you might want to steam it first.

Lately, I've found rice cauliflower in the grocery store freezer area, microwaved that and let it cool. Perfect texture and so easy to use! Oh, and by the way, the EWG says cauliflower is "clean" and doesn't have to be bought organic!

If you love this recipe, here are a few other cauliflower recipes:

Is this Smoothie Vegan & Dairy-Free?

As are all my smoothies, this smoothie recipe is vegetarian, vegan, plant-based, dairy-free, and gluten-free.

Another detox recipe you might enjoy is my blender Ginger shots, no juicer necessary!

Other Smoothie Recipes To Check Out 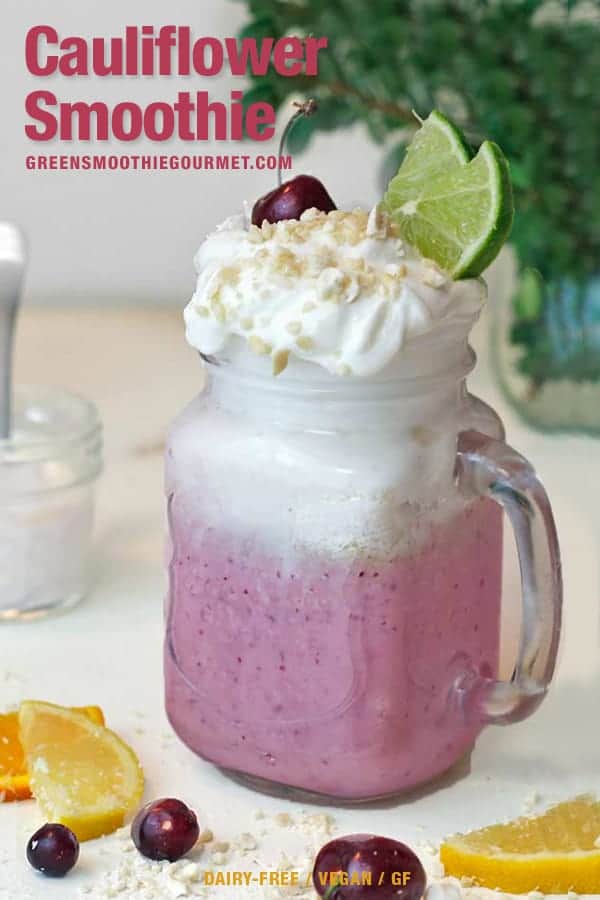 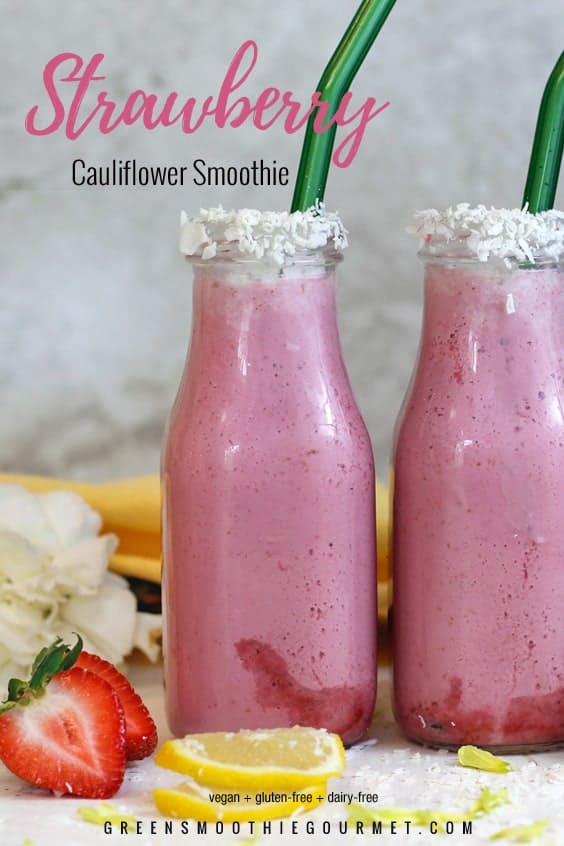